The Misericordia Sisters in Winnipeg

Our history shapes our future
To understand the vibrant health centre Misericordia is today, one has to look no further than our roots: the Winnipeg history of our founders, the Misericordia Sisters. While Misericordia Health Centre has evolved, always meeting the ever-changing needs of Manitobans, we remain guided by the values of our founders.

The Misericordia Sisters: building a path
Being a single mother simply wasn’t an option for many women in the late 1800s. Rather than face community stigma, many Winnipeg women simply left their children on church doorsteps.

Three Misericordia Sisters and a trained nurse journeyed from Montreal to Winnipeg on December 1, 1898 to address this very concern. Their goal was to set up a safe, healthy environment for single mothers and their infants and provide them with care and instruction so they could eventually function on their own.

The Sisters began their work in a house on Broadway Avenue, overcoming many hardships, and eventually purchased property on Sherbrook Street and Ida (now Wolseley). Construction on the Winnipeg Maternity Hospital was completed in 1900.

The Sisters flourished in their new surroundings; their knowledge of midwifery and how to safely deliver babies was passed onto many doctors over time.

Soon, the Winnipeg Maternity Hospital’s patients were outgrowing the space. A home for single mothers and their children, as well as an orphanage with 100 children, were established in St. Norbert.

In response to the growing medical and surgical needs of Winnipeg residents, the Winnipeg Maternity Hospital became Misericordia Hospital in 1917 and began to admit men.

The Sisters’ opened the Misericordia School of Nursing in 1916; graduates were highly sought after, primarily due to their faith-based training.

Single mothers and their children lived at the hospital until 1958. Three houses – referred to as Rosalie Hall – were used as temporary residences until 1965 when Villa Rosa was built in Wolseley. Post-natal care and supports for young families in the community were enhanced in 1998 when Wolseley Family Place – a family resource drop-in centre – was established.

The 1990s brought much change in health care. The Misericordia School of Nursing closed in 1997 and Misericordia’s focus evolved from acute care to delivering community-based services.

The remaining Sisters lived in our new personal care home, Misericordia Place, from 2000 until their departure for their Motherhouse in Montreal in 2004. A visible legacy – an illuminated cross on our Cornish building – was installed to commemorate the Sisters.

The Sisters remain actively involved in the facilities they established, including Misericordia Health Centre, through their involvement in annual Heritage Group Collaborators’ meetings.

It is our privilege to follow the path of the Misericordia Sisters and continue to carry on their legacy of compassionate care in responding to the needs of Manitobans.

Misericordia Health Centre is proudly the Future of Care.

Misericordia Health Centre in Winnipeg is proud to be part of the larger International Misericordia Family comprised of organizations which carry out their Missions in the same spirit as the Sisters. 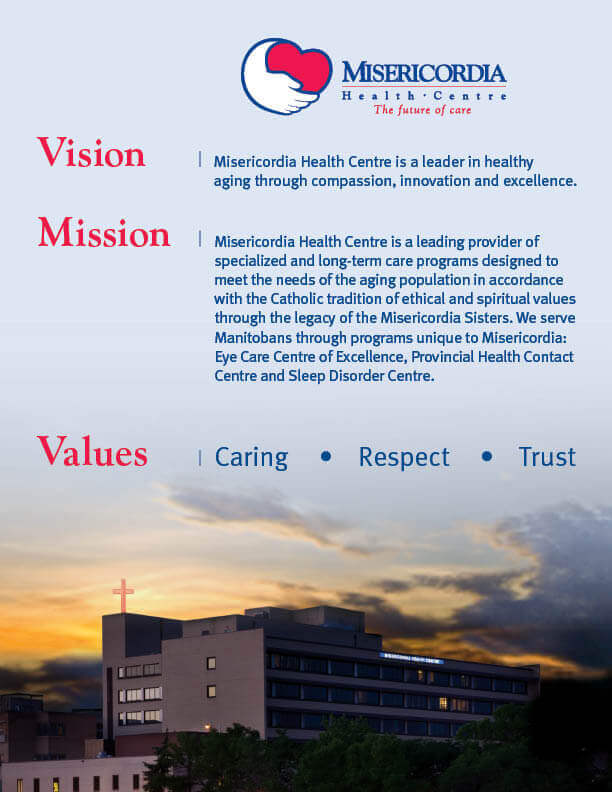